Paris: Picasso’s masterpieces are coming back 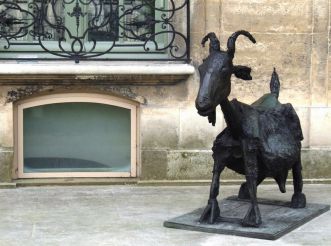 Five years later,Pablo Picasso is coming back. In September 2014, the museum of the great Spanish artist in Paris opens its doors to visitors again after the reconstruction started in 2009. The exhibition area has been expanded almost twice and now occupies 3800 square km. This will give an opportunity to get acquainted with paintings and sculptures of the famous artist which visitors have never seen before as the works were in the archives. In this way people can understand the multifaceted oeuvre of Picasso more widely. The museum’s management expects the increasing number of visitors – around 850 thousand persons per year.

In the world, there are two biggest collections of Picasso’s masterpieces. The first one – Picasso Museum – is situated in Barcelona where the artist lived and studied during his youth, and where his first exhibition took place. Picasso presented his works of art to this beautiful city. The major part of the artist’s life was closely connected with Paris, France. This is the place where he grew up to the real master, where he was looking for new forms of art self expression and gained the popularity. Most masterpieces presented in the Picasso Museum in Paris were given by Picasso’s heirs. The museum was opened in 1985 in the 17th-century mansion Salé located in famous Parisian district Marais. The Embassy of the Republic of Venice was situated there in the second half of the 17th century, and in the 19th century – Arts and Crafts School.

Parisian collection of Picasso’s works is considered to be one of the best painting galleries in Europe. Nowadays the collection includes more than 200 paintings, over 150 sculptures, collages, drawings, graphics, photographs, ceramic items, written archives and books illustrated by Pablo. Perhaps, the most impressive works are the portraits of Picasso’s closest people – his wives Olga and Jacqueline, his kids, friends and neighbors. These portraits are fulfilled with deep and sophisticated psychology. It’s interesting that the exhibition covers all the years and periods of Picasso’s activity. The works are represented in chronological order what helps to see the artist’s evolution better, to understand the development of his views and artistic methods. The painter’s private collection of the works of art of Matisse, Braque, Cézanne, Miró and objects of African art is also exhibited here.

Picasso couldn’t gain the popularity for rather long period of time, neither in native Spain nor in France. The fame came to him not at once and not in an easy way. The way to it was very complicated; he showed his best talents and hard work to achieve it. But now world’s best galleries fight for the right to exhibit his paintings. Picasso told once that Art is a lie, which leads to the truth, and Magic, which helps to overcome the throe of daily life. The Picasso Museum in Paris gives the joy of exploring the great art, magic and the deep inside world of the great master.