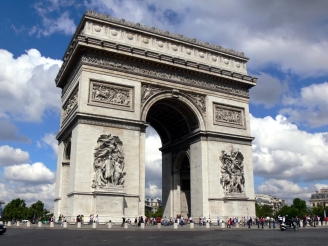 In the center of Charles de Gaulle in Paris is world famous Arc de Triomphe. It is considered one of the brightest symbols of the city. Construction of the tower lasted for more than three decades, from 1806 to 1836. The construction of this historical monument was dedicated to the mighty victories of the French army. The Arc de Triomphe is located at the top of the Champs-Elysées, on a picturesque hill of Chaillot. During the construction of arches, this area was below the capital of France. It is interesting that up. 1970 area of Charles de Gaulle Etoile or called Etoile.

Place for the construction of the Arc de Triomphe was chosen particularly carefully. In the Middle Ages the road connecting the Palace of Versailles and the Louvre, was called "Triumphal Way". This is where Napoleon decided to install the same name and arch.

The Arc de Triomphe is a type of arch of Constantine, located in Rome. It has architectural elements from the classic antique style. Decorate the arch numerous reliefs that tell the story of battles and victories of Napoleon's army. Inside the building there is an interesting museum on the inner walls of which you can see the names of commanders and soldiers of the French Army, killed in fighting battles. Climb on top of the arch can be on ladders that are installed on both sides of it. Breaking the 248 steps of a narrow corridor paved, tourists have the opportunity to admire the stunning views of the romantic Paris.

The upper tier of the Arc de Triomphe engraved names of the most famous battles of Napoleon's army. One of the most famous bas-reliefs of this structure is considered to be the song "La Marseillaise" or "Speech on campaign volunteers." This dynamic composition, showing the soldiers serving in the campaign. Of particular interest is the figure of the winged goddess personifying freedom and victory.

In 2003 was carried out major restoration of the Arc de Triomphe. Today it is open to all and is considered the most famous historical monument not only Paris, but the whole of France. You can get under the arch on numerous underground passages, which are laid to her from different parts of the city. And from the observation deck located on the 50-meter height, you can not only enjoy the magnificent panorama of the city, but also to see just impeccable geometry "Triumphal Way".