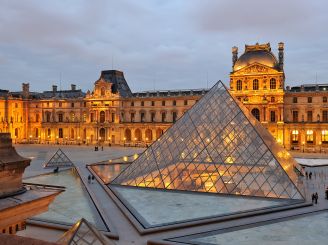 Over the recent years, the Louvre has been considered one of the most visited museums in the world. It is located in the heart of Paris, on the right bank of the River Seine. Construction of the castle began in the 13th century during the reign of Philip Augustus. Originally, a medieval fortress was located on the site of the today's museum. It protected from enemy attacks in the Viking Age. Later, in the 15th century, the French king Charles V turned it into ​​his residence and founded a huge library in the Louvre. Over the years, the boundaries of the castle were constantly expanded; new buildings were constructed in the eastern part of the residence. At the order of King Francis I, the famous architect Pierre Lescot demolished the old fortress and built a new palace in the Renaissance style on its site. Its current square shape the Louvre acquired during the reign of Louis XIV.

The first museum was opened in the castle in 1793. Over the centuries, the Louvre collection was enriched with priceless artefacts. Currently it has about 400 000 unique historical and cultural monuments of different ages: from ancient Egypt, Greece and Roma, to the Middle Ages and modern times. All museum exhibits are divided into thematic sections, and always open to the public. Today, the Louvre is the main cultural symbol of the capital of France. Such great masterpieces as The Mona Lisa by Leonardo da Vinci, The Venus de Milo, The Marriage in Cana by Paolo Veronese and many other works of art are kept in the Louvre.

In 1981, extensive restoration work was completed in the Louvre. Under the project of the American architect Ieoh Ming Pei, at the main entrance to the museum, the Louvre Pyramid was erected. This metal and glass pyramid represents the connection between the royal court and modernity. On both sides of the pyramid, you will see smaller pyramids. You can discover rich collections of the Louvre both individually or by taking a tour. However, you should know that this palace impresses not only with its exhibits, but also with its size. Going along its walls, you’ll cover the distance of two kilometres; if you stay at each exhibit at least twenty seconds, you’ll spend twenty four days in the Louvre!