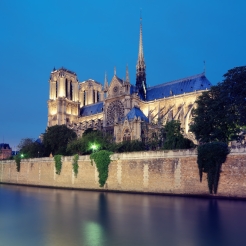 Notre Dame de Paris, known to many as the Notre-Dame de Paris, is considered one of the most important monuments of the French capital. It was built back in 1163 in the eastern part of the Ile de la Cité, which is located in the heart of Paris. Even before the construction of this amazing cathedral in its place was located the first Christian church built on the ruins of a Roman temple.

The Cathedral was for centuries an important center of life in the country. He was a silent witness to various historical events and served as a safe haven for many travelers. There were crowned emperors held the royal wedding, here met the first parliament of France. It is from the Notre Dame de Paris which all the roads in France - in the 18th century geographers, it was decided to measure the distances from the cathedral.

The history of this unique structure began in the reign of Louis VII, as the authors of the project were invited famous architects of that time, Pierre de Montreuil and Jean de Chelles. There are also many legends that tell of the devil's participation in the construction of the cathedral. It is said that the blacksmith forge Biskorne charged curly gate to the temple. Blacksmith was unable to fulfill the order and called for help from Satan. In the morning the servant of Notre Dame, which came out to look at the sketches of future gate, he found a blacksmith without feelings, and before him in all its grandeur stood gate with openwork patterns. When the gates were installed and the locks are cut, it turned out that they can not be opened. Locks were able to open only after sprinkling holy water.

To date, the Notre-Dame de Paris is a striking example of French Gothic and Romanesque styles. Its height is 35 meters and the length - more than 130 meters. The main western facade of Notre Dame Cathedral is amazing huge sculpted panels, on which are carved various scenes from the Gospels. At the top of Notre Dame de Paris, there are images and statues of fantastic creatures: chimeras and gargoyles. The building is crowned spire of the cathedral, made ​​of wood and covered with lead. Its base is located at the foot of the bronze statues of the apostles. Above the main entrance is a mystical image of the Last Judgment.

Impressive unusual interior of the temple. On its walls there is no painting, and the only decoration of this room are a variety of stained glass, made ​​as far back as the Middle Ages. Some of it was restored in the mid-19th century, the others have kept to this day its original appearance. Particularly attractive main stained glass window above the central gate. It has an excellent rose shape and diameter is nearly 10 meters.

In the right part of the building are two ancient chapel, which store the sculptures and paintings of many famous artists. According to ancient tradition, each year they are presented as a gift to the cathedral on the first day of May. The real gem of this amazing temple is installed therein organ, the largest in the whole of France. You can listen to the sound of his ministry during the Sunday Catholic mass. And breaking the four hundred and two steps, you will be able to get on the excellent viewing platform, equipped with a south tower. From there, you will enjoy an amazing view of Paris.

To get to the Notre Dame Cathedral on the subway to go to the station Site, which is on the "4" or to the station Notre-Dame-St.Michel, situated on the line "B".