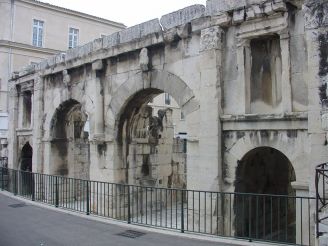 Formerly Porte d ' Arles this monument was built by the Romans in the 1st century BC. AD It is located east of downtown Nimes.
This door was the entrance to the city in Roman times place. She was also passage travelers followed the domitienne since Italy towards Hispania. Two large arched entrances are at the center of the door, they allowed the movement of tanks. Above each arch one can see a key representing a bull's head but unfortunately both are severely degraded. Then the two ends there are other arches smaller, which were borrowed by pedestrians. Ground on the sidewalk you can see a circle of black pavement, it symbolizes the location of the two towers which overlooked the door. In the background behind the door there is also a statue of Augustus.
Several bus lines stop outside and this place: Rows C, D, I, J and K.