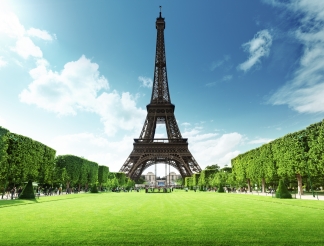 Eiffel Tower is the first Paris landmark which comes to mind. This famous symbol of the French capital is considered to be the main tourist destination throughout France.

The story of the 300 metre tower began in 1887. Following the work of more than three hundred workers in the construction of the tower, citizens of Paris could see Eiffel Tower in March 1889. Gustave Eiffel, a famous French engineer, was the main architect of this masterpiece. He decided to erect a new iron construction in the city reasoning that this construction demanded a small investment. Parisians showed little interest in a future local point of interest. The robustness of iron construction also raised a lot of doubts.

Originally, Eiffel Tower was 312 meters high, thus being the tallest building of those times. According to the agreement, the tower had to be demolished after 20 years since it had been erected, but the development of broadcasting changed its fate. The first antenna atop of Eiffel Tower was placed there in 1921, thus starting an active broadcasting. In 1935, television broadcasting appeared and after 22 years a 12-metre television mast completed the construction of the tower. The entire weight of Eiffel Tower – a unique and inimitable structure – is approximately 10 000 tonnes, while amplitude of oscillations of its top doesn’t exceed 15cm even in the worst weather.

Eiffel Tower is beautiful any time of day or year. Sunny morning makes it looking slender and graceful. As night falls the tower is illuminated thus looking even more spectacular. Every day at 7:00pm – when the illumination is on – Eiffel Tower and its flashlight blow traveller’s mind. The tower is particularly beautiful during new-year holidays, when it is decorated with multicoloured Christmas lights. At this period of time, Eiffel Tower looks like a big Christmas tree towering in the very heart of Paris.

Today, Eiffel Tower serves as a television tower and a meteorological station. However, it is also one of the most popular tourist destinations in the world. Three sightseeing platforms of the tower offer breathtaking views of Paris. You should overcome one thousand seven hundred steps in order to get to the top of the construction. On the first floor you’ll have opportunity to taste local cuisine in the restaurant located there. On the second floor you’ll enjoy a sweeping view of the capital. Gustave Eiffel`s office in its original condition is available for visitors on the third floor. You can see the whole Paris from its windows.

At the foot of the tower there is a shopping area, where you can buy various souvenirs, as well as take some pictures or sample tasty roasted chestnuts. Over six millions of tourists annually visit Eiffel Tower. In all its born days, the tower has welcomed almost 240 millions of visitors. And it is still considered the most romantic monument in Paris.

You can get to Eiffel Tower by metro. You should use line no.9 and get off at Trocadéro Station; this way you’ll get to the right bank of the Seine and a large observation platform, from where the tower is well seen. If you go downstairs of the platform and cross the river, you’ll find yourself right next to the tower. In case you use line no.6, you should get off at Bir-Hakeim Station, which is on the left bank of the Seine. Then you should walk along Branly Quay in order to get to Eiffel Tower.